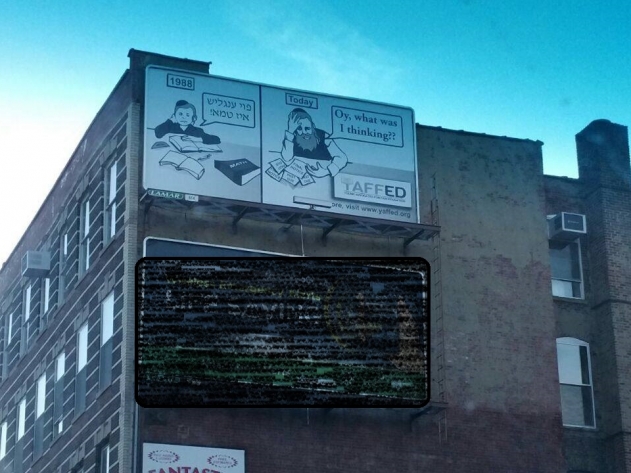 Currently, boys in many Hasidic and ultra-Orthodox Yeshivas are graduating without a command of the English language, let alone a high school diploma or the skills necessary to obtain a GED. Yaffed was created to address the lack of general education in these communities.

But in order for our work to be effective, we need community members themselves to rally for their sons’ future.

To that end, Yaffed is working on an ad campaign to inspire parents to speak up and demand a better future for their children.

After the success of our Prospect Expressway billboard in 2012, and our most recent billboard in Williamsburg, we now intend to put up additional billboards and other ads promoting the Jewish value of general education in other Hasidic neighborhoods, including Boro Park, Crown Heights, and Monsey.

With your help, we will be able to put up our next billboard in Boro Park in early March.

Education is a Jewish value. Throughout history, even the most learned and Torah observant Jews, ranging from the Tanoim and Amoroim to the founders of the Hasidic movement, were known to have been highly educated for their times.

Additionally, Jews have historically valued self sufficiency, and in today’s economy it is very difficult for an individual to be financially secure and self sufficient without a proper education.

In fact, right here in New York many Hasidic Jews are incapable of speaking the English language fluently, and many are forced to rely on government assistance due to an inability to command a decent income with their meager education.

By promoting a value for education and by improving the current system of education, we hope to remedy the extreme levels of poverty within the community and we also hope to foster a generation of educated individuals.

The funds from this campaign will go exclusively to the creation and publication of ads and posters promoting education in Yeshivas. All money that exceeds the cost of the upcoming billboard will be used toward other ads and billboards within the Hasidic and ultra-Orthodox neighborhoods, since it is only when the people desire change from within that a lasting reform can happen.

Our previous billboard on the Prospect expressway was a smashing success. It put education back on the map as an issue worth fighting for. Education entered Hasidic discourse when few had been talking about it before. Now we hope to push it to the next level with additional billboards within the Hasidic communities of Boro Park and Williamsburg to encourage people from within the community to speak up on behalf of their children and demand that their Rabbis and Yeshivas begin implementing a better, well-rounded, secular education for their boys.

YAFFED is an advocacy group committed to improving educational curricula within ultra-Orthodox schools. Our work involves raising awareness about the importance of general studies education, and encouraging the leadership of the ultra-Orthodox world to act responsibly in preparing their youth for economic sufficiency and for broad access to the resources of the modern world. We encourage compliance with relevant state guidelines for education while maintaining respect for the primacy of Judaic studies and the unique cultural and religious values of the ultra-Orthodox community. Our mission is to ensure that all students receive the critical tools and skillsets needed for long-term personal

by Save The Ancient Mikveh Team