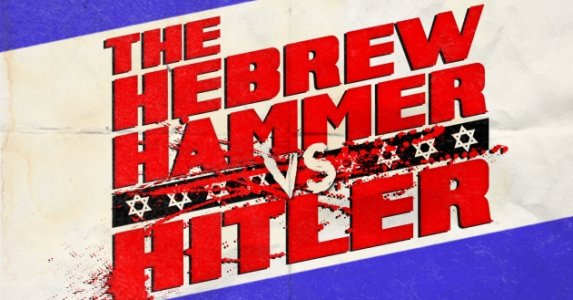 The Hebrew Hammer vs Hitler

When Hitler gets his hand on Time Sukkah technology™ and begins rewriting Jewish History, Mordechai Jefferson Carver (The Hebrew Hammer) and Mohammed Ali Paula Abdul Rahim set out through time to stop him. Can the Hammer and Mo prevent Hitler from un-inscribing the Jewish people from the book of life?

The first film premiered at the Sundance Festival before being released in a limited number of independent theaters here and abroad. However, it made its biggest impact on audiences who mainly saw it for five years of airings on the Comedy Central network in the United States.

As its popularity grew it was chosen by Vanity Fair and The Boston Globe as one of the top holiday movies of all time. Additionally, Moment Magazine polled Jewish film critics around the country and The Hebrew Hammer was included on a list of the hundred most influential films in the history of Jewish Cinema.

When it was released it made a cultural dent, but more importantly it made people laugh, and continues to do so ten years later. As a filmmaker, that’s all I could ever hope for.

The sequel, in my not-so-humble-opinion, is an even better film than the first. Imagine ‘History Of The World Part 1’ crossed with ‘Bill and Ted’s Excellent Adventure,’ as written by me, and hopefully you’ll get a sense of what I want to accomplish. I have travelled all over the world with the first movie and people have asked me when the sequel is happening. Hollywood never helped the first time around — it’s a broken system, and they sure as hell aren’t gonna help now. The future of film financing has changed, and it’s now in all of our hands to make the movies we want to see.

The Hebrew Hammer was a big comedy with little money but a whole lot of ideas. The sequel is bigger, better, and baaader. If like me, you love smart yet silly satire that is an equal opportunity offender, please help me make this a reality. Before I die, I’d love to make this movie for you. And, you have my word that I will not quit until I’ve made one of the funniest movies of next year for you. And if you support the project, I’d love to let you in on the whole the process from top to bottom. We’ll have a lot of laughs making this movie together. With no further a-Jew, It’s Hammer time.

I’m starting by asking for $200,000 to make The Hebrew Hammer VS Hitler a reality. After years of false starts due to rights issues, I recently negotiated back the rights to the movie. If you’re a fan of the first film, this is a now or never situation. The film can be made for 1.5 Million, but if we can raise this first step, I’ll be able to piece the rest of the financing together. My dream would be to surpass that 200K number — to get as much money from the fans of the first film to keep the sequel as creatively pure as possible. A portion of what we’re asking for will go towards making an offer to a “name” actor for the role of Hitler, further ensuring the rest of the funding happens. While we’re at it, I’d love to hear your suggestions on who you’d like to see play the part!

However, the more money raise the easier it will be to make this a reality. I would like to begin principal photography in the middle of May. That will last a month, followed by another 4 months or so of post-production.

The Hebrew Hammer vs Hitler

Jonathan Baruch Kesselman is the Godfather of Jewxploitation. Jonathan began his career as a filmmaker after finishing graduate school at the University of Southern California when the feature film version of his student short, 'The Hebrew Hammer' was greenlit in 2002. The film premiered at the 2003 Sundance film festival before its limited theatrical release. However, the film gained cult status after being seen by a much wider audience on Comedy Central. After having his heart broken repeatedly over the past decade by the Hollywood system, Jonathan decided to become proactive and kill Hitler. Jonathan resides in Brooklyn, NY with his lifelong partner Anxiety.