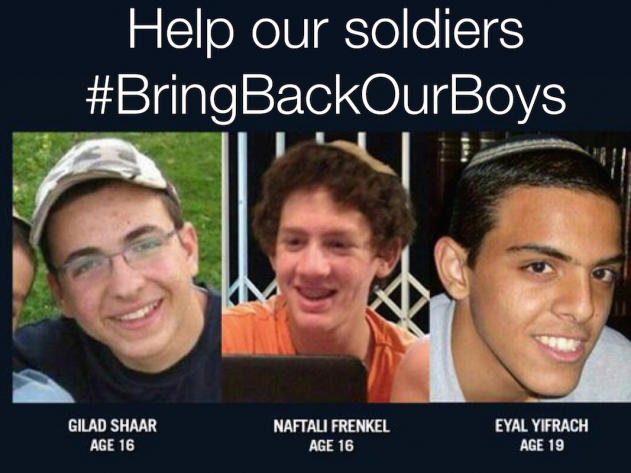 OUR ACTIVITIES CONTINUE: We wanted to update you as to how things have developed over the 48 hours since the funerals. First of all, we gave our volunteers- ALL of whom have been working 21 hour days for the past two weeks- some time to absorb the blow, together with the nation, and regain their mental and physical strength. Again, because we work with the head security teams in the area, a considerable number of them were in Chalchul attending to the boys’ bodies within minutes of their discovery, and many of them were violently attacked on the way– and we needed to give them a day to collect themselves after it all. Over that day, the army was transitioning many of the units involved in the search for the boys, and replacing them with more specialized forces aimed at searching for the terrorist kidnappers/murderers. As such, we still have approximately 1000 soldiers stationed in the Hebron region. Within a day, our operation was ‘back in full gear’ and as we write this, we are finishing preparations for our fourth ‘Mega Shabbat’ for all the soldiers. Coordination has gotten more intricate as most soldiers find themselves stationed out in the Hebron Region villages and the specialized units are more ‘quietly’ stationed, but- like last week- our Shabbat meal deliveries will begin tomorrow at 5 am, and last until midnight Saturday night. All halachik (Jewish law) considerations have been consulted on as well. Here at the campaign we are not diverting at all from our original mission- which is to allocate for the soldiers and be there to make their lives better in any and all ways possible.

However, people expressed that they wanted a way to capture the incredible spirit and unity of these past two weeks as well, as a way to memorialize the boys. As always, we are a ‘grassroots,’ people-led campaign and therefore we are looking to add the following activities to our efforts as well. These are suggested based on initial directives of representatives of the families- which we allow the right to be subject to change as the parents get more involved after the week ‘Shiva’ mourning process, and as we hear more suggestions from you:

1. The possibility of a gala ‘thank you’ event between as many of the units involved in the search as possible, and the families of the boys themselves. The event would be held after the ‘Shloshim’ 30 day period of mourning. It would be a chance for the parents to personally thank the forces that searched so tirelessly for their boys, and the soldiers to literally ‘ be comforted’ by the families.

2. We are pursuing several initiatives that would work to increase and maintain the unity that was created amongst all sectors of the population, during the two week search for the boys. More announcements on this as things develop. We also welcome all suggestions on ideas for this, or any other segment of these activities.

3. We are trying to see if we can raise the funds to donate a Torah scroll in memory of the boys. The scroll would either be dedicated to the Cave of the Patriarchs in Hebron, or to the army, and specifically to one of the units involved in the search (We are checking in to both possibilities, or the ability to get the funds to do both!) It is our hope that this Torah scroll will not only serve as a merit to the holy boys’ memory, but will also serve to forever inspire soldiers and citizens alike; reminding them at all times of the appreciation and affection that the nation has for the soldiers- and that was so clearly displayed during this search- and of the nation’s great unity. For this reason, we are increasing the goal amount to be raised, so as to be able to fulfill many of these projects.

The ultimate beauty of this project has always been that it has been grassroots. We therefore, again, welcome and encourage all of your ideas and suggestions. Our continued thanks to you all!

ON THE NEWS: Obviously now, we sit in silence in mourning trying to absorb this horrible blow. Words and thoughts are hard to form right now, but certainly we will keep you updated as all this develops. As of right now, there are rumors that they are moving even more soldiers in to Hebron, but right now, there is just tremendous loss and pain. May we all comfort EACH OTHER amongst the mourners of Zion, and may we know no more pain.

When we started this campaign, we thought we would try to support and feed the soldiers involved in the search for four-five days. Due to your incredible response we have now been able to support all areas of the search over these past two weeks. Working through the security team in the Hebron region we have been able to gain exclusive access to many of the soldiers serving in the various villages in the search zone- where most of them are stationed and have been delivering them daily meals. We have become the army’s main address for all their needs including, underwear, hats, deodorant, and toiletries. We have organized a “Mega- Shabbat” for all 3000+ soldiers, and will be again this weekend and every weekend necessary. We launched a white ribbon-tying campaign in Israel, in solidarity with the boys and their families. The army has told us to budget for at least a month and on being here for as long as needed until the boys come home.

UPDATE: Who is greater than the People and friends of Israel! In contrast to the forces causing this terrible situation, you have responded with the best of human nature! Just a few days ago, we humbly set our goal, hoping to just be able to do ‘something.’ We never underestimated the incredible grandeur of the world community—only our personal ability to reach it. Only because of you have we now achieved that initial goal, and you now lead the way: It costs approximately $1,400 -$1,500 a day to fund the 3,000 soldiers. According to the army, no matter what, this is going to be a long-term offensive. We will be there as long as the army is there and you are there with us. Together, we are a grassroots operation at its best- people giving entirely to people… with the best part of course being when we can collectively use these funds to sponsor the ultimate celebration; thanking the soldiers for their hard work in bringing Naftali, Gilad, and Eyal home—and when the boys themselves one day get to see this and see how much all of you cared. Thank you!

…Citizens the world over are joining together in their concern for the three teens kidnapped in Israel by terrorists: Eyal Yifrach, 19; American-citizen Naftali Frenkel, 16; and Gilad Shaer, 16. Tensions are high as we all remain glued to our screens; watching the news, banding together on social media, and praying for their release. In the Gush Etzion/Hebron search area, the danger and realities are very palpable, as thousands of IDF soldiers have quickly descended and been mobilized to the area over the last 30 hours. Wanting– needing– to show their support for the soldiers and for all the families involved, a group of local citizens began mobilizing as well– ‘adopting’ these soldiers and bringing over extra drinks, food, care packages, pizza…anything we could do to keep up their morale and put a smile on their face in an otherwise tense and dangerous situation. We know that many of you in the global community want to help as well. We wanted you to be able to have a direct hand in the search area and in the efforts to bring our boys home, and so we are asking you to join us in this Unity Initiative. This campaign is already taking action and is being run by concerned citizens, who love their brethren in Israel, with proceeds going directly to the stores who have agreed to provide their wares at bulk prices. Considering the horrors these kidnapped boys must be experiencing every minute, can’t we take two minutes to help give that extra boost to the forces working towards their rescue?

In times like this we need to band together with all our friends and brethren around the world. We need to feel a part of something positive, as much as the forces doing the ‘hard work’ need our help.

The efforts of this campaign are already under way. Proceeds will go directly to the local stores that have already agreed to donate their wares at bulk/warehouse prices, and to the additional stores that have contacted us wanting to help as well. Thousands of soldiers have now been hastily deployed in the region, largely in makeshift conditions. $7,000 will help us provide extra food, drinks, and care for the next few days. If there is still a need after that (may the teens be returned, safe, soon!), we will need to raise more.

A NJ native, I have had the privilege on being involved in the administration of several major Jewish organizations and am currently Director of 'Jerusalem 5800,' the first long-term initiative aimed at planning the Jerusalem Metropolitan region in all areas of tourism, housing, industry, transportation, etc., through the year 2050 (www.Jerusalem5800.com). I am a lover of all the nation on Israel and am proud to be able to do my part to help.

by Together Beyond Words