Join us in making toys that instill lifelong Jewish values in our children.

Do you remember how you discovered your Jewish identity? Did it happen at home? Hebrew School? Your Bar/Bat Miztvah? Maybe you are still figuring it out. Or maybe you have a child who is going through this discovery right now!

Since we are most impressionable as children, chances are that the foundation of your Jewish identity was formed as a child. Here at Yom Tov Toys, we believe that toys can be used to harness children’s imagination as means for discovering their Jewish identities.

Yes, we know that there are already plenty of Jewish holiday toys. But what about Jewish identity the rest of the year? There isn’t a single cool and modern Jewish toy that isn’t holiday related. Something that incorporates Jewish values, culture and identity. We know, because we tried to buy them.

So, as both parents and creatives, we got to work and created Yom Tov Toys. Yom Tov Toys are high quality, modern designed, Jewish value-based toys with vibrant stories. We are artists, innovators, and change-makers that believe in thinking differently and more deeply about the toys our children play with.

With the help of artist and toy designer, Simon “Mudmonkey” Boses, we created our first collection of toys called Gani. Gan is the Hebrew word for garden, and the Gani live in a secret garden in the middle of the desert. Their secret garden is the most beautiful, peaceful place in the world. The Gani could stay in the comfort of their hidden utopia…but they don’t. They are drawn to go out and make the world a better place. 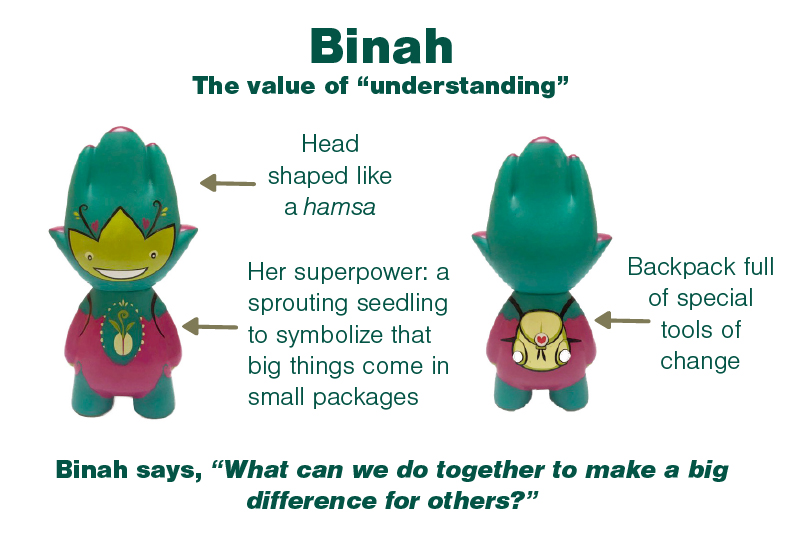 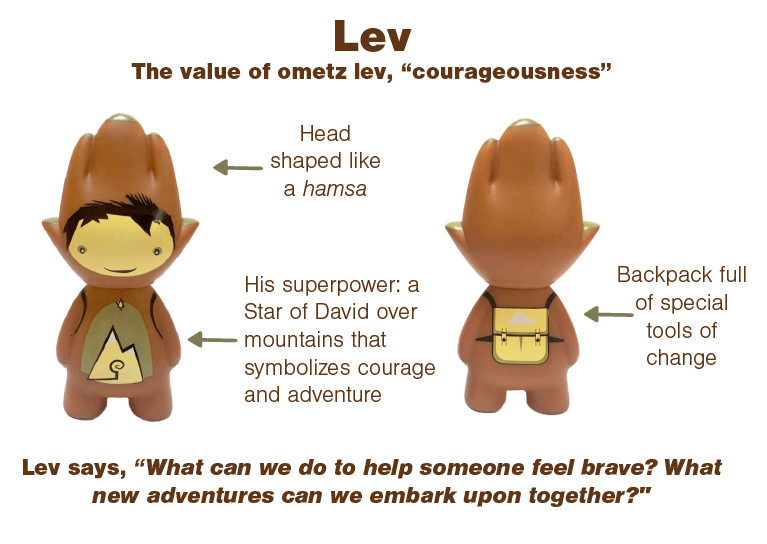 Late night brainstorming sessions led to design after design and prototype after prototype that were all safety and kid-tested. Manufacturers were sought locally, in Israel, and beyond. What felt like an endless back-and-forth with our hand sculpted models slowly gave way to bright and resilient vinyl that feels great in kids’ hands. Younger kids love to play with the figures and older kids covet them as collectible “art toys.”

We Need Your Help for the Future of Gani

We have had a successful first run of the design, manufacturing, and safety testing of our first two Gani friends. As of now, we have four other character designs that we need your help to produce! In addition, we would love to be able to create books to accompany each of the characters.

Some Gani you can expect to see in the future will be based on the following Jewish values:

Everyone’s interpretation of religious rituals differ but the roots of Judaism are based on universal, humanistic values. We believe that children can benefit from toys that reinforce these values. Toys stimulate imagination and get children thinking about the world around them. Jewish value-based toys can aid children in discovering their Jewish identity. It takes a lot of work to make quality toys that we can treasure for a lifetime, both in the tangible sense as well as the mental and emotional sense.

Elana was born in Jerusalem, Israel and was raised in the Tampa Bay area. She earned a bachelor’s degree from Eckerd College in Sociology with an emphasis in consumer trends. Her career started in London and New York City as a consumer trend forecaster in the youth market, forecasting trends for companies like Adidas, Levi’s and Coty Cosmetics.

Jessi was born and raised in St. Paul, Minnesota. She earned a bachelor’s degree at Columbia College, Chicago in Film with an emphasis in production and began her career working for The Producers Guild of America, Miramax and E! Entertainment in Los Angeles.

Both Elana and Jessi left their fun, yet unfulfilling careers for lives and careers with meaning and purpose. They both hold director level positions in Jewish non-profit organizations and are fellows at Gratz College pursuing graduate degrees in Non-Profit Management.

Elana’s 10 year old daughter, Fiona Joy, and 7 year old son, Evan, had a significant role in the creative process. Evan said, “don’t tell them exactly what the symbols mean, let them decide for themselves.” Fiona Joy drew the first Hamsa based design.

Simon is the amazing sculptor who brought the Gani from concept to clay. He is a father, sculptor, toy collector and avid board game enthusiast. He was born Israel, but grew up in St. Petersburg, Florida immersed in the area’s rich and diverse art community. After earning his BFA (in General Sculptural Studies) from Maryland Institute College of Art, Simon was awarded a residency at Houston Center for Contemporary Craft in Houston, TX. His passion for sculpture and working with children naturally led to designing toys, and his involvement in projects like Yom Tov Toys. Simon currently lives in Santa Fe, New Mexico where he owns and operates Make Time, a community Maker Space that focuses on inspiring youth to use tools and technology to learn, create and innovate.

{ A special thank you to the National Museum of American Jewish History for hosting the filming of our campaign video.} 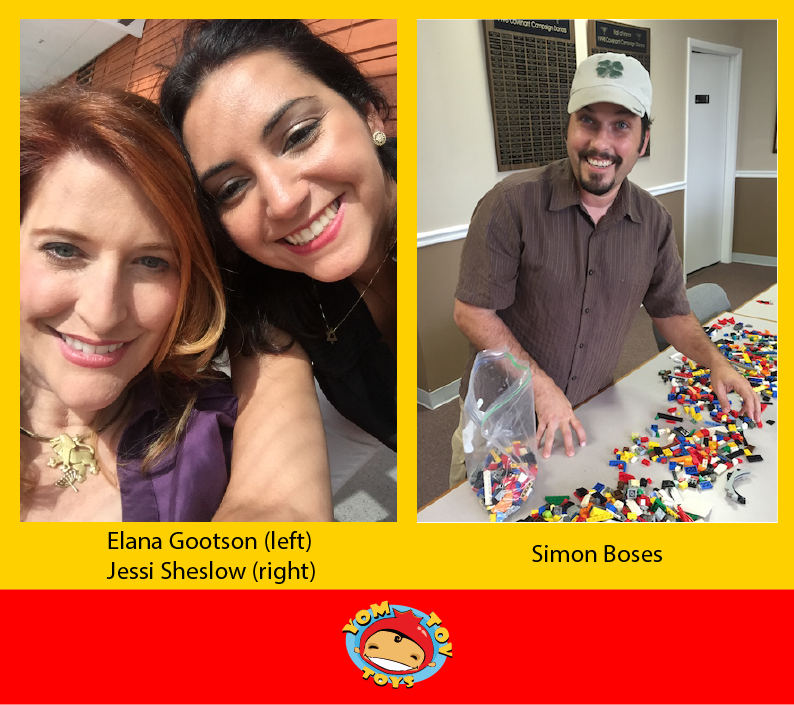 “I really believe I had lot of good ideas and felt this was viable because it didn’t exist and you don’t have the opportunity to create something that doesn’t exist often.” said Elana Gootson, director of philanthropy and collaborative entrepreneurship at the Jewish Federation of Pinellas and Pasco Counties in the Tampa Bay area on Florida’s West Coast. – The Jewish Exponent

“Using her coursework at Gratz College, student Elana Gootson launched Yom Tov Toys in 2016 with her business partner and fellow student Jessi Sheslow. The two entrepreneurs are now producing an innovative toy that is different from anything else available on the market today — a toy that seamlessly combines kid appeal with Jewish humanitarian values.”  – The Philadelphia Jewish Voice 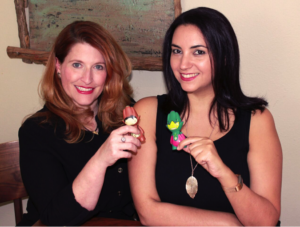 With your help we can pass the final and most important test: getting these toys into the hands of children. Yom Tov Toys will inspire children to become the incredible Jewish people they are destined to be!

The Yom Tov Toys team is made up of Elana Gootson, Jessi Sheslow, Simon Boses, and of course, the Gani. The Gani would like you to know that they're not your average toy. And they are most definitely not your average Jewish toy. They are ENERGY, they are COMPASSION, they are ADVENTURE, they are COMPLEX. Just like your children. Just like you. And they are here to connect and open a whole new portal into our children's discovery of their Jewish identity.