Yes
Home / Projects / Help us make our movie: NOTE IN THE OAK

Help us make our movie: NOTE IN THE OAK

We are a team of Jewish artists from Vancouver, BC. We collaborate together on our passion projects. Many of us are professionally employed by big budget American productions that are filmed in Vancouver and we develop our own projects during our spare time.

During the summer of 2014 we produced a short film titled NOTE IN THE OAK, starring Carmel Amit and Moshe Mastai, our film was the official selection at the following film festivals:

The story was inspired by true events that took place in New Jersey in 2012 and during the past two years we have developed this short into a feature film (100 minutes) and we are now ready to produce it in 2017.

Our hero is, Joyce, is a homecare provider. Following the death of her long time patient she goes on a quest to find his estrange son, Corry, to bring him to his father’s grave.

Like many successful stories we have a nice mix of suspense, laughter, hope, heart, violence and a good slice of a Jewish culture. However, the feature script is not yet fully complete. Some vital elements are still missing.

This is where we are seeking your participation.

We need your help to secure some licensed Jewish artistic material, these poems and pieces of music are essential to our plot and without it, our story will be good but missing some of the key Jewish elements that it requires. Since Jewish culture and heritage is so important to us, we are reaching out for your help on this portion of our budget. Any assistance is so greatly appreciated. 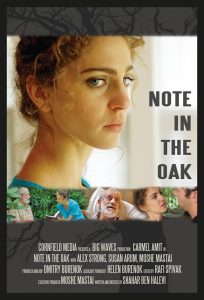 Help us make our movie: NOTE IN THE OAK

Writer/Director: Shahar Ben Halevi is a media professional with over 20 years experience in the industry. During his career he worked in print press, radio, TV, and in digital media. Shahar wrote for Israel's most highly acclaimed newspapers, worked for the national radio, and was a founding member of YNET, one of Israel's most successful portals. He is the author of two children books - The Ordinary Prince, and The Blues Owl (which will be released in 2017). Behind the camera he directed 3 short films and a documentary. He hosted over 100 live NFL games on Israeli TV. In Vancouver he worked on numerous productions of feature films, TV shows, commercials and shorts. Shahar studied film and TV in the University of Haifa (Israel) and Media and Communications at Simon Fraser University (Canada). Shahar is a father of 3 children and lives in Vancouver since 2005. You can contact him at sbhsport@gmail.com