We are Women Wage Peace, a rapidly growing grassroots Israeli movement of over 25,000 women (and men!) united across all traditional dividing lines – political, religious, ethnic, social and geographic. We were founded three years ago in the midst of deep despair and cynicism in the aftermath of Operation Protective Edge/the 2014 Gaza War in order to reclaim hope and take action for a viable future for our region. Our goal is to reach an honorable and bilaterally acceptable political agreement to the Israeli-Palestinian conflict and to increase the number of women in all aspects of negotiations.

Our journey to peace is bringing together tens of thousands of secular and religious, young and old, Jewish and Arab Israeli women from the political right, center, and left for a two-week journey across Israel. The journey culminates in a mass rally on Oct 8th in Jerusalem where decision-makers will hear our united demand for a diplomatic agreement loud and clear.

Join us as we journey to Peace!

Yes, it’s possible! Because more and more women demand an agreement.
The journey to peace began last week in the Negev desert, tracing the path of Abraham, father of the Jewish and Arab people. It is now continuing in the north of the country with local marches, roundtables, cultural events, and meetings with mayors, religious leaders, cultural figures, and local residents.

Yes, it’s possible! Because we all have the same basic need – a secure future.
On Oct 8, we’ll join thousands of our Palestinian sisters in the Tent of Hagar and Sarah, named for the mothers of our two peoples. There near the Dead Sea we’ll share our hopes for peace and reconciliation and invite more women and men to sign the charter. Later that day, we’ll hold a mass rally of thousands in Jerusalem. 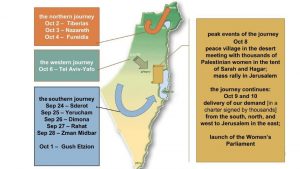 Yes, it’s possible! Because we’re not stopping without an agreement.
On Oct 9, we’ll launch the Women’s Parliament, a group of 120 women leaders for peace from diverse communities, basing its engagement with all 120 of Israel’s elected parliamentary leaders on an uncompromising demand for a diplomatic agreement.

Yes, it’s possible!  With your help.

With your support for journey to peace, you can take an active part in the most significant attempt made in recent years to grow a critical mass of Israelis ready to demand a change for the better in the reality in our region.

The journey to peace is an ambitious project requiring significant funds. Israelis and supporters worldwide have already helped us raise 90% of its total budget. We’re now counting on people like you to help us raise the rest – people who believe as we do that only a diplomatic agreement will end the decades-old conflict between Israel and the Palestinians; people who believe that a critical mass of civil society in Israel can indeed influence the government to accept the fact that security will only be achieved through a diplomatic agreement.

Support us on our journey to peace. Together we can make history.

Each donation raised in this campaign will go directly to cover expenses for the journey to peace, enabling us to fund all the events we’ve planned throughout the country. All donations are tax-deductible in the U.S.!

What Women Wage Peace has accomplished in the past three years: 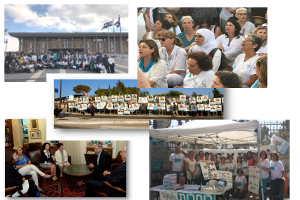 We are succeeding in making our voices heard above the wail of sirens, showing our leaders that tens of thousands of women are organizing, training for strategic action, and learning to speak with a united voice: Enough bloodshed! Enough tears! Yes, peace is possible!

Women Wage Peace was founded three years ago in the aftermath of Operation Protective Edge, the 2014 Gaza War, rapidly becoming Israel’s largest grassroots organization for peace.Today we are over 25,000 registered members and tens of thousands of supporters from all over the world.We do not advocate for any specific political initiative. Women Wage Peace is a registered NGO operating in accordance with Israeli law. For questions about this campaign or Women Wage Peace, please write to wwpcrowdfunding@gmail.com. All U.S. donations are tax-deductible.

Help a Jewish Orphanage Save its Community in the Pandemic Crisis

With your help, we can provide the proper medical attention to our Jewish community in Odessa