Every year, the history and the memory of the Holocaust moves a little further back into the past. Although there are many educational efforts out there to continue teaching the history of the Holocaust, the number of people who are ignorant and unaware of the Holocaust is dramatically increasing. This is especially the case in our slice of the world: S.W. Riverside County, CA. With your help, we can change these statistics. How? By building a Holocaust Memorial in Murrieta’s Town Square Park.

Storytelling is key to passing on Jewish history and to educating society. Moreover, visual storytelling is essential to solidifying these stories and the lessons they teach in our minds and in our hearts. That’s why the Holocaust Memorial will be so effective. It will be a physical, visual reminder of Holocaust history and how it has shaped our world today. It will be an opportunity for people to learn about the past in order to change the future. Education leads to empathy, which in turn will ensure that something like the Holocaust will never happen again.

Building the Holocaust Memorial has already been given unanimous approval from the Murrieta City Council and has been designated a plot of land in the park near its other memorials for us to use. The memorial is designed to be an interactive experience. The layout welcomes viewers to sit, meditate, and learn. It will be a space for the general public and specifically students and their teachers, to explore the story of the Holocaust across 10 vertical, 6-foot panels.

It will tell the story of how anti-Semitism throughout history led to Nazism and the Holocaust. But it will also tell the story of liberation, immigration to Israel, and a hope for the future. This aligns with our motto: “Out of despair…hope!”

“How important it is that our children will have a learning opportunity outside the classroom as well as inside, so that they will never forget the lessons of the past.”
— Patrick Kelly, Superintendent, Murrieta Unified School District 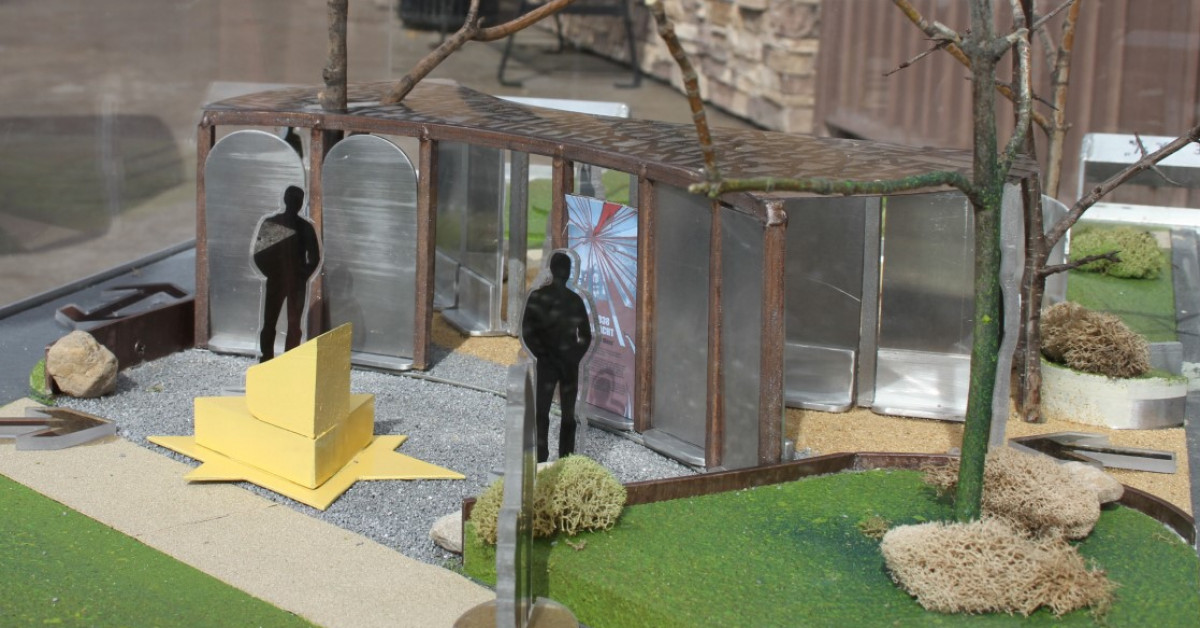 A model of the new Holocaust Memorial shows what the finished product will look like after it is installed in Murrieta’s Town Square Park. 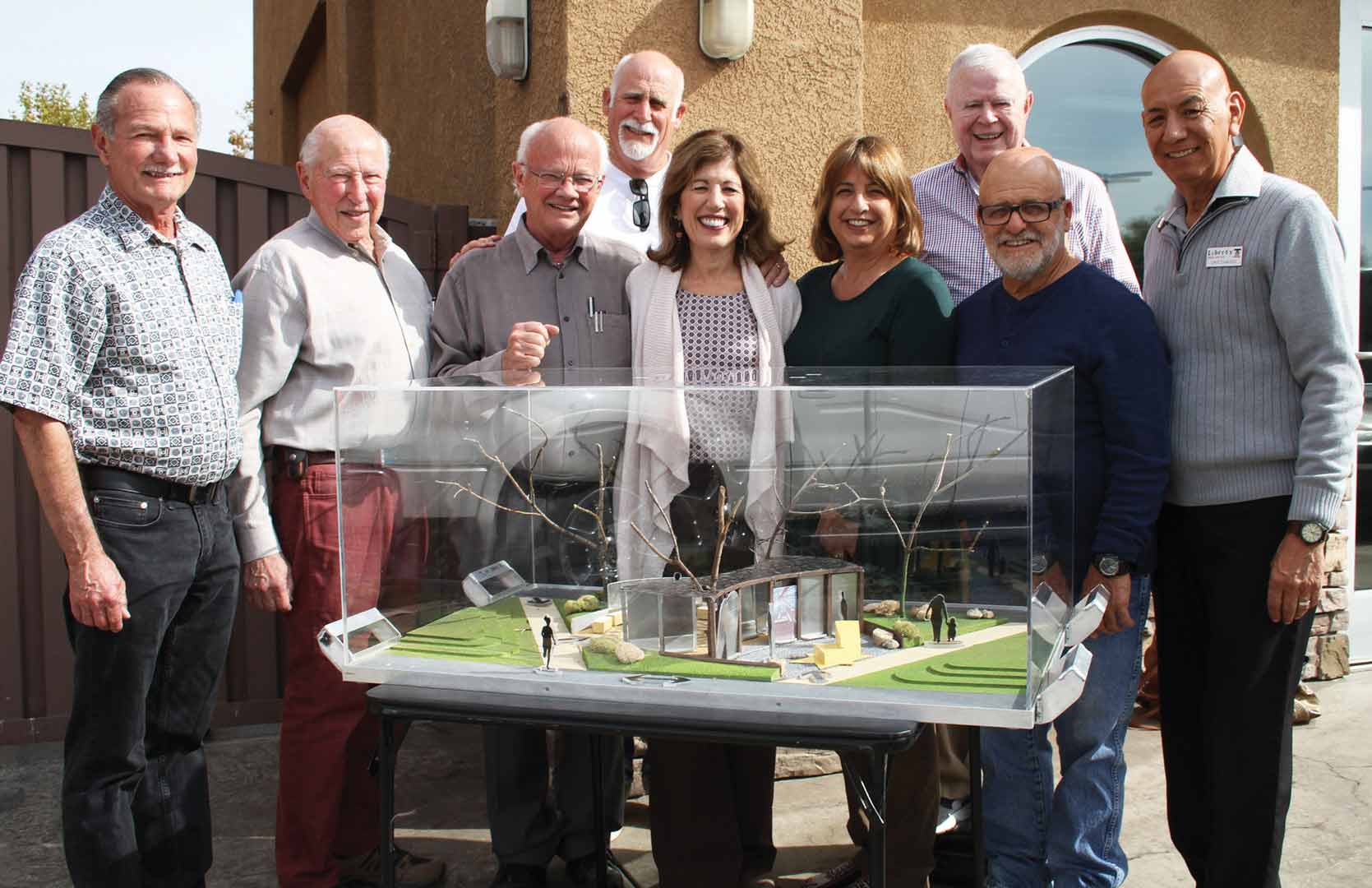 Founding members of the nonprofit Holocaust Remembrance Foundation of the Valley pose for a photo behind a model of the new Holocaust Memorial. [Kim Harris photo]

“For many years, my wife and I attended the local Holocaust Remembrance Day observance at the conservative synagogue in Murrieta, California. We heard many testimonies, and our understanding of the Holocaust deepened.  At the 2013 service, we looked around and were saddened to see that only 22 people had come. No civic leaders, no other pastors, no youth groups, no one from the local schools were there. Just a few elderly people and the rabbi took the time to remember. The stark reality hit us:  If we didn’t do something, the memory of the Holocaust and all those who perished in it would fade into vapor and be gone forever. This is how God moved us to form the Holocaust Remembrance Foundation of the Valley (HRFV) and create our annual March of Remembrance. 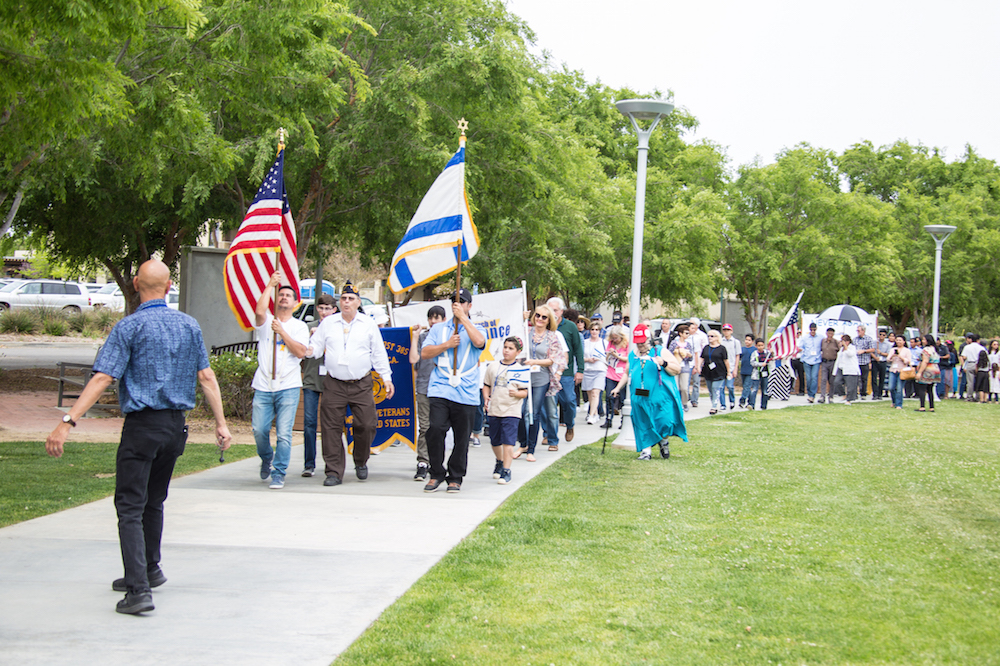 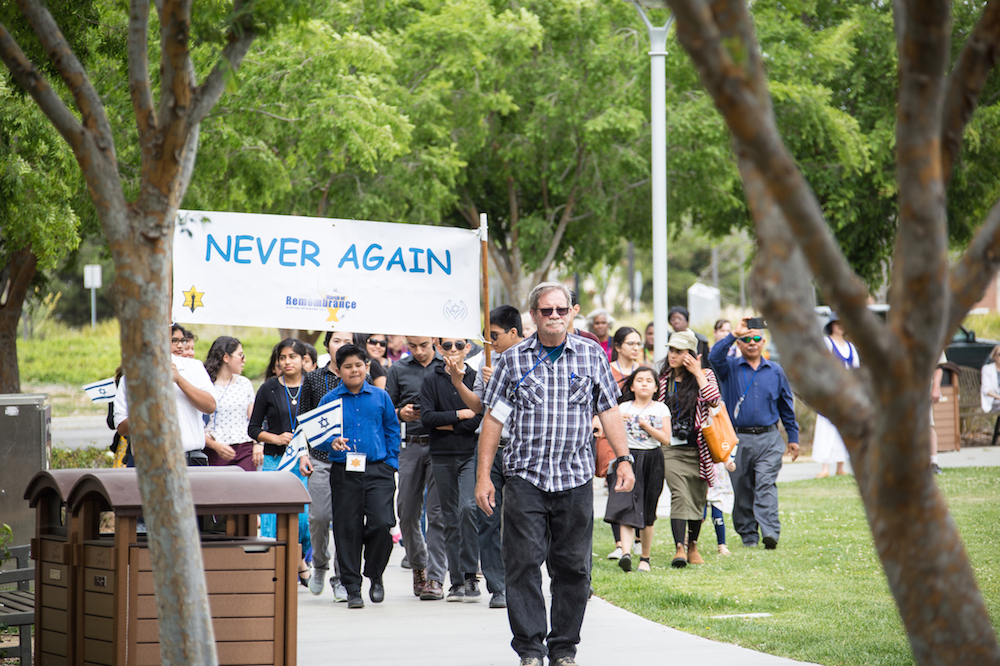 The Holocaust Memorial is a reminder of the dangers of anti-Semitism, prejudice, and intolerance. Right now, we are living in a time of racial, religious, and political divide. The levels of intolerance and hate are at a boiling point. Many of us feel at a loss for how to help and what to do next. Our project will give you the opportunity to make concrete, tangible, and lasting change. Not just for Jews in the fight against anti-Semitism, but for all people who face discrimination.

All it takes is one story to hit home for someone. One field trip to the park, to view an impressive memorial and think about justice from a space outside the classroom. To open up their eyes and help them see the humanity in other people no matter their differences. With more people exposed to this type of thinking, we will have a more tolerant society.

Your support will propel our project forward. We are already working in cooperation with the local school districts and students will reap the benefits of this memorial for generations to come. The cities of Murrieta and Temecula will benefit because the Memorial will become a destination for visitors. Finally, the memorial also offers a space for co-existence. It is an opportunity for Jews, Christians, and community leaders to take a stand together to fight prejudice and bigotry in all forms.

“Building a Holocaust Memorial is very important. Just words may or may not be remembered but a memorial is permanent. You cannot, NOT remember the Holocaust.”
— Dr. Robert Gyori, Holocaust Survivor, Hungary

Your support will go directly to the site preparation, fabrication of the monument, installation of the monument and maintenance of the facility and ongoing educational programs. Our foundation is made up of all volunteers, and therefore overhead is extremely low.

The memorial is a collaboration between the Jewish and Christian communities and is estimated to cost roughly $411,000. So far we have raised $47,150 to completely cover the developmental costs of architect and engineering. Your support will cover a portion of the entire cost to make this a reality! But beyond the money, you will be supporting unity between these two communities and all communities in our future. 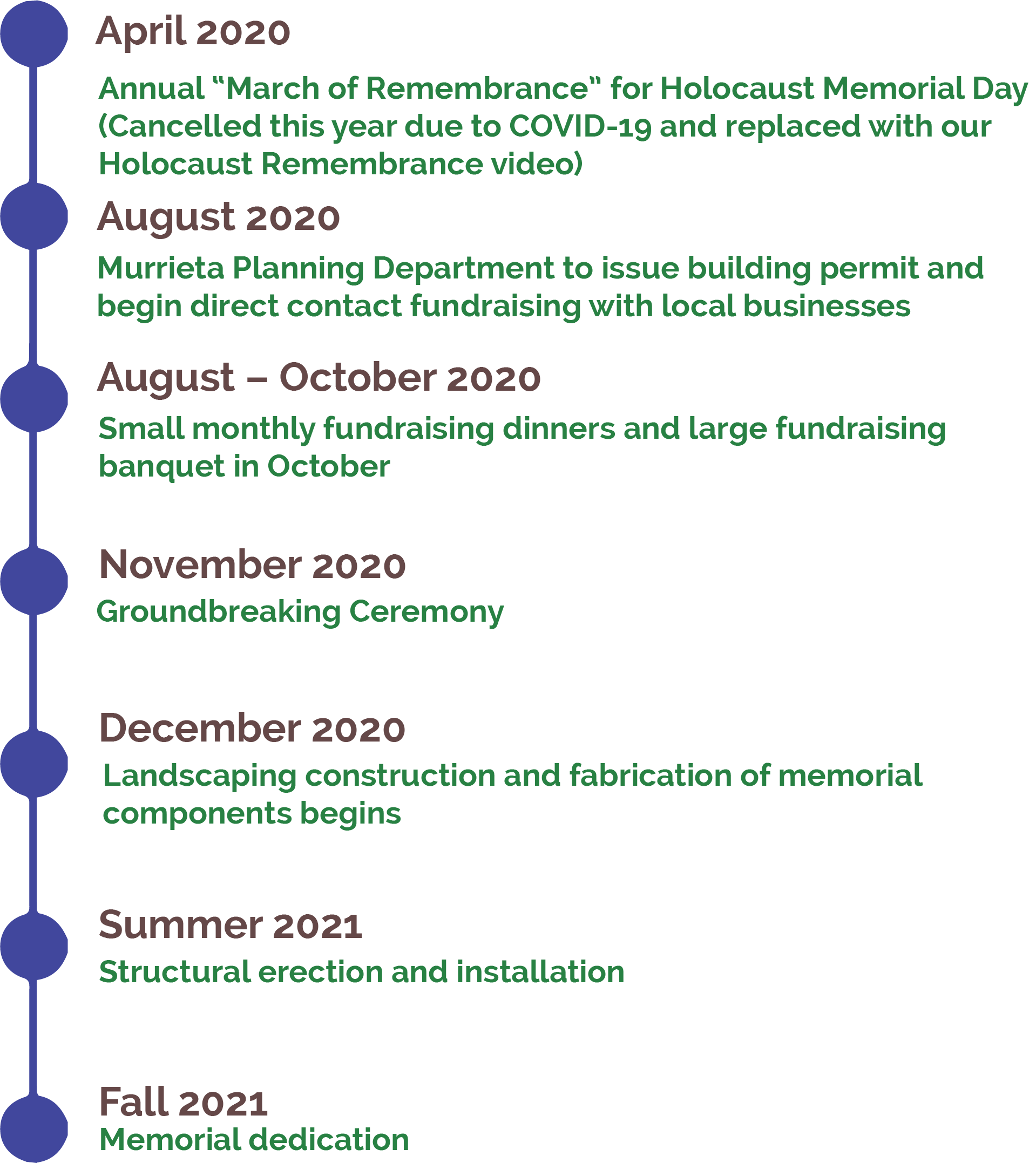 Highlights from our feature in Valley News

“As far as we know, this is the first educational Holocaust Memorial in the county,” Congregation B’nai Chaim board member Irv Michlin.

“The goal for this memorial is to inspire the community to face hatred and genocide and foster human dignity,” Murrieta’s Parks and Recreation Manager Lea Kolek during the council meeting.

Councilman Rick Gibbs said that this memorial is really a memorial that goes well beyond, “because it is for all of humanity.”

Mayor Jonathan Ingram said that there are many things in his life that he is honored to be engaged in and the Holocaust Memorial happened to be one of them.“This has been an amazing process to watch with how endeared people are to this and what it means and that we can never forget, as Christians, as human beings that we are obligated to make sure that something like this, never transpires again,” he said.

“It’s very important and it’s a privilege to work with you anyway I can.” Ingram said he would be the first to write a check in support of the memorial.

“In Israel we have built Yad Vashem (Holocaust Memorial Museum) so that every single one of the six million will be remembered and so that it will NEVER HAPPEN AGAIN.”
— Sharren Haskel, Member Israeli Parliament (Knesset)

Holocaust Remembrance Foundation of the Valley (HRFV.org) is not-for-profit foundation formed by a community of volunteers from Southwest Riverside County. From 2013 to 2017 HRFV focused on our annual Holocaust Remembrance Day commemoration. As attendance and interest grew we expanded our vision in 2017 to include building a permanent Holocaust Memorial. In 2019 our vision expanded even further to include Holocaust Education events and influence with the local school districts.