Today, you have an opportunity to perform a huge mitzvah. This January, we will sponsor the travel and accommodations of over 100 Survivors of Auschwitz-Birkenau. They will return to Poland to commemorate the 75th Anniversary of its liberation. In addition to providing airfare, accommodations and three full days of programming, there will also be a program for our Survivors who observe Shabbat. Your gift can help to make this program really special.

Imagine a dark and cold January Erev Shabbat in Krakow as many of our Survivors arrive just prior to the 75th Anniversary, filled with heavy emotions at facing a return to Auschwitz in just a couple days.

To ease that experience and the burden of difficult memories in Poland, we want to welcome them back with a Shabbat filled with warmth and light as they gather closely together to enjoy the beauty of the lit candles, the melody of chanting Kiddush, and that first sweet taste of challah.

Imagine providing a Shabbat filled with honor and song, delicious food, and the passage of legacy from generation to generation.

Your donation at any level will help us to provide this and all of the Shabbat programming for the Survivors. Given that this is likely the last commemoration where Survivors will be strong enough to travel and participate, we are especially determined to complete the mitzvah of providing this special Shabbat.

About the 75th Anniversary of the Liberation of Auschwitz

The Auschwitz-Birkenau Memorial and Museum will mark the 75th Anniversary of the Liberation of Auschwitz-Birkenau with a special event at the site on January 27, 2020. The Anniversary Ceremony, which will be attended by survivors, their families, heads of state and world leaders. This ceremony will be the central event of the 2020 International Holocaust Remembrance Day observance across the globe.

Five years ago, generous donors sponsored the travel and accommodations of 100 Survivors from around the world for the 70th Anniversary of the Liberation of Auschwitz. As we approached the 75th anniversary, we anticipated that–given the age and frailty of the majority of the survivors–we could expect to have 50-75 survivors attending this event.

However, to our surprise, we were inundated with requests, and now have over 100 Auschwitz Survivors who want to make the trip! Though we reached our initial fundraising goal, we now intend to continue fundraising so that every Auschwitz Survivor who wants a special, Kosher Shabbat in Poland gets to have one.

“Nothing is more important for the upcoming 75th anniversary of the liberation of Auschwitz than having survivors of this horrible place present. They are the direct link, the witnesses to this atrocious crime. That is why I am willing to do whatever is needed to bring them back. Let the world see them, let the world hear them, let the world remember.” ––Ronald S. Lauder

Anniversaries of the Liberation of Auschwitz-Birkenau have served as bitter-sweet reunions for survivors for many years. What we have learned from prior years is that what our Survivors want more than anything, is the chance to be together. Survivors share a special bond and a common language as a result of their shared experience. This is a unique opportunity to provide our Survivors with the opportunity to reconnect with one another, to tell their stories, and to share a lovely and traditional Shabbat meal.

In addition to the $1.7 million we have raised from generous donors this year to sponsor the travel and accommodations of the Survivors, we need to raise an additional $54,000 to cover the cost of the Shabbat Program. We want to help honor our Survivors and their families with a beautiful, festive, delicious Shabbat! Your support will allow us to make it really beautiful and memorable.

The Auschwitz Birkenau Memorial Foundation (formerly “Friends of Auschwitz Birkenau Foundation”) is a 501(c)(3) charitable organization established in 2012. Our Mission is to secure the preservation of the authentic remains of the former German Nazi concentration camp, Auschwitz-Birkenau, and to seek Jewish voices of leadership for the future.

While the physical site of Auschwitz Birkenau is located in the Republic of Poland, Jewish voices have had an influence on critically important decisions pertaining to the preservation and conservation of the site. Most of these voices belonged to the survivors. As the generation of Holocaust eyewitnesses passes away, we are committed to continuing the financial support for the preservation efforts and providing leadership for the site.

In 2015, the 70th anniversary commemoration ceremony was attended by almost 300 Auschwitz Survivors, more than 50 international government delegations, and leaders of international, social and religious organizations.  This meaningful event was broadcast live in its entirety by more than 250 television stations from around the world. Data compilation indicates that more than half a billion people viewed the direct transmission, and press accounts of the observances reached 1,752,000,000 readers. 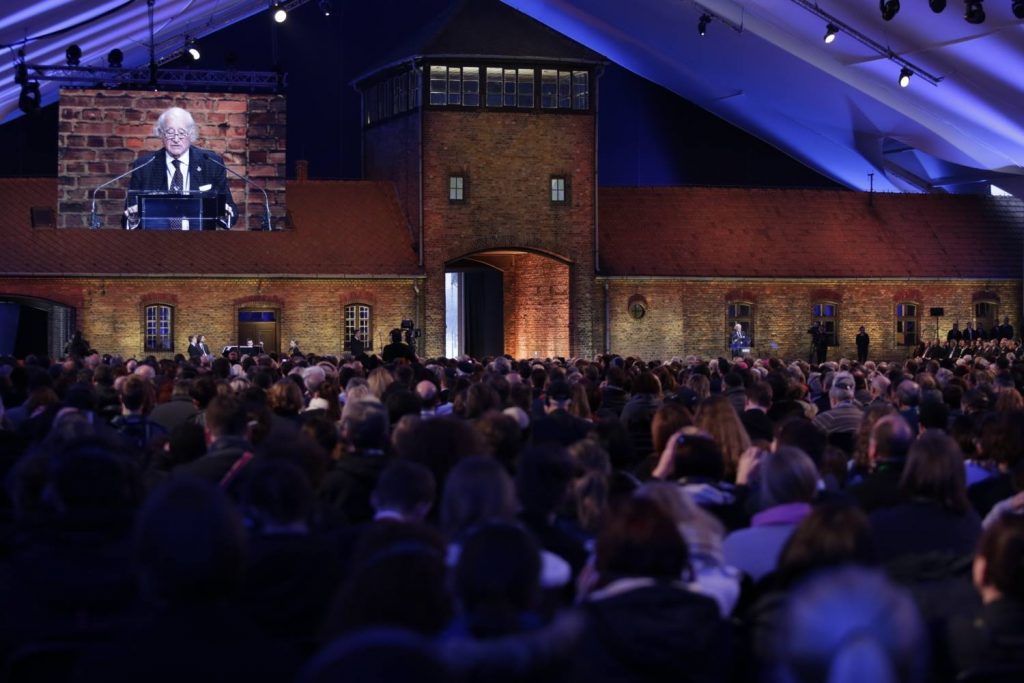 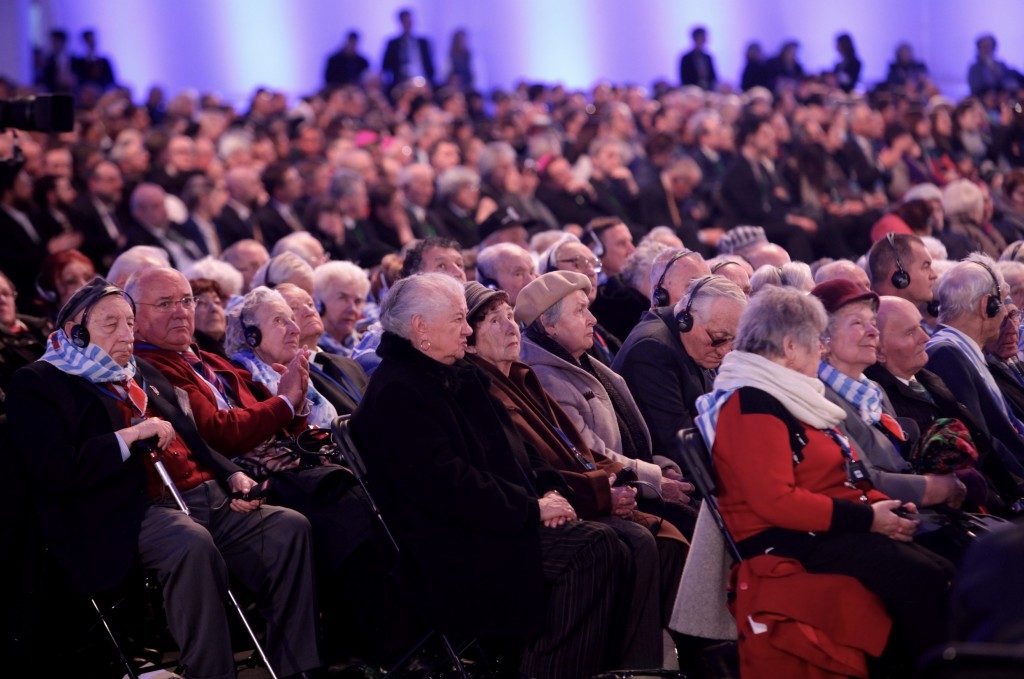 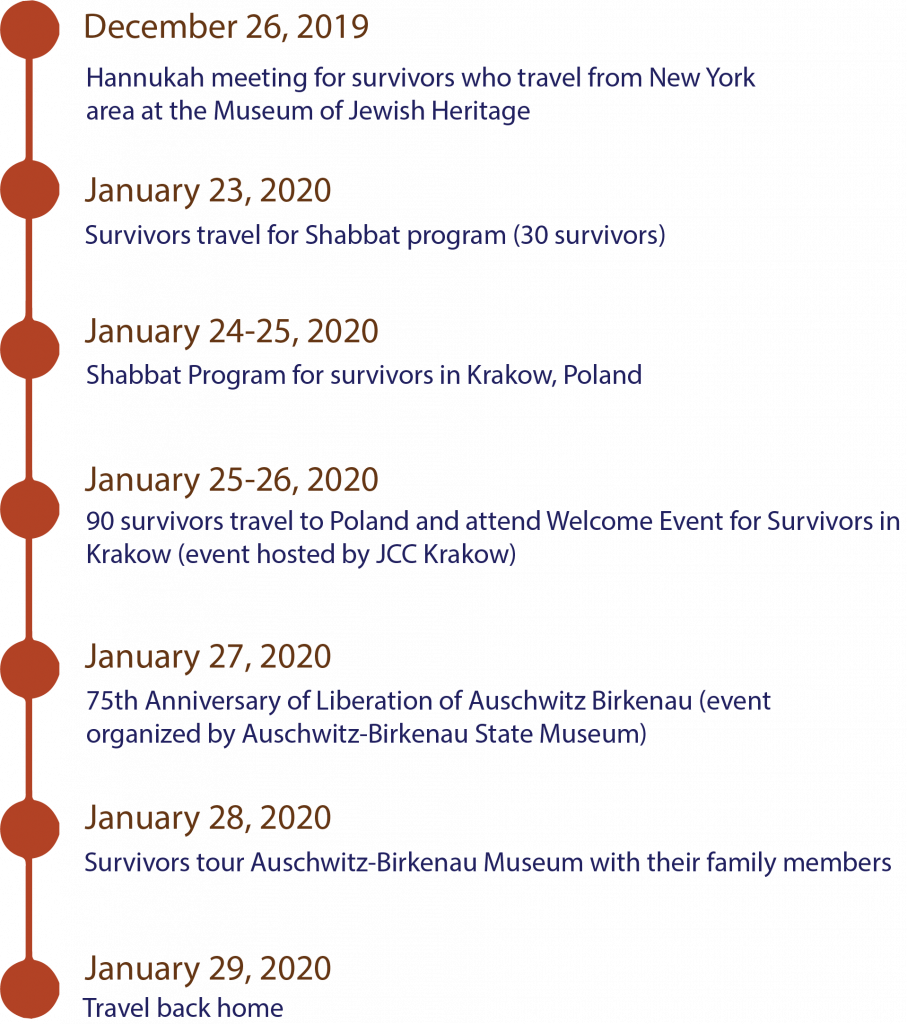 Secretary of the Board, Leading the Survivor Delegation

We’d like to thank the following people who have donated $1.7 million for this event thus far:

JRoots for organizing a meaningful journey for survivors.
UJA for all their help recruiting survivors for the delegation.
JCC Krakow for creating the welcome event for survivors

Support the Power of Knowledge for a Brighter Future

Ensure that the history of the Holocaust is not forgotten!

by Holocaust Centre of New Zealand

Building a reminder of what we vow will never happen again!

by Holocaust Remembrance Foundation of the Valley