Training for Grassroots Israel Advocates in the UK

Second, and even more important, is the general lack of interest in the Middle East. Support for the Jewish state is weak, not due to hostility, but because of indifference. Most of the British public (66% according to a 2014 poll) either take no side between Israel and her enemies or don’t know whose side they should be on. 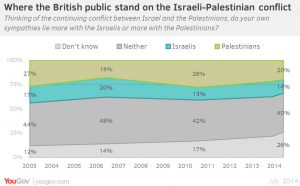 This means that there is not much of a pro-Israel constituency in the UK. Israel’s diplomats therefore have little local support to draw on when trying to influence relations between the two countries. While the leading Jewish organizations succeed in influencing the government well beyond what there limited numbers would imply, their hand would be strengthened with more grassroots support for Israel. On the other hand, there is also no overwhelming and deep-rooted opposition to winning people over.

Now is the time

The last election in the UK (June 8, 2017) left many shocked at the unexpectedly positive performance of the Labour Party under the leadership of Jeremy Corbyn. This isn’t the forum to go into a detailed account of this far-left activist (you can get a fair rundown on him here), but what is vital to know is that he is, at the very least, soft on antisemitism. Jew hatred in the Labour Party, transparently disguised as anti-Zionism, has become normalized under his leadership. This is no secret and has been widely covered in the British media (here‘s an example). Nonetheless, large numbers of British voters, particularly the young, cast their votes for his party. They did not feel that the hostility to Jews displayed by significant elements of his party should be an impediment to their support. Corbyn lost by a narrow margin, leaving open the real possibility of his party winning the next vote, giving Britain a government that would be both anti-Israel and antisemitic.

Jew hatred is not widespread in the UK, but tolerance of antisemitism is epidemic. With another election scheduled for December 2019, it is vital to educate British voters on the significance of this vile form of bigotry and why it must be rejected by all.

Some are rising to the challenge

Recent years have seen many local initiatives to create “Friends of Israel” groups (this one and this one are two outstanding examples; search Facebook to find more than a dozen more). Uniting Jews and non-Jews to work within their local communities, these groups are bubbling over with enthusiasm and plans. Drawing on their passion and commitment they have already begun to raise awareness of Israel in communities across the UK. For these groups to move to the next level of success in advocacy, they need to develop and hone their campaigning skills. I want to bring my more than three decades of experience in training advocates of Israel to these organizations.

How your money will be spent

My name is David Olesker and I run an organization called JCCAT (the Jerusalem Center for Communication and Advocacy Training). For more than three decades I've been training advocates for Israel, and I'm well regarded in my field.