During a moment in the morning prayers, the community recites liturgy in which we act as if we are angels. In acting like angels, we turn to one another and give one another permission to continue in prayer, saying “Notnim reshut”. In some Hasidic communities, as well as mine at Hebrew College, another phrase is added, “in love” – b’ahavah” and people within the community look up from their prayer books and actually make eye contact with another during prayer. A group of individuals look up from their personal, transformative practice to invite one another into a shared, angelic experience.

Throughout my life, different people have looked me in the eyes and gave me permission to join them. A dirty dining room floor to sing slow songs on Shabbat. A new camp, tucked between beautiful trees in wine country. My Jewish path has been fostered by loving permission. This album is the beautiful result of those spaces and relationships of growth.

This album is also an invitation, sent to you, in love. The Jewish tradition is sustained and elevated by our active interpretation. The transmitting of wisdom is done through sharing our own personal insights and perspectives, chiddushim. One of the ways I find myself in this tradition is through music. This album is an invitation to you into that world of personal interpretation, into thousands of years of conversations.

In addition, I want to do this project with folks who have been major influences in my life and given me permission, Dan Nichols and Josh Warshawsky. Rather than record simply in a studio, or simply live, I am hoping to do both in the hopes of capturing the unique essence that I think resides in these melodies.

Where Does the Money Go?

Live Recording with Josh Warshawsky (and the Chaverei Nevarech Ensemble): $3,750

Jewcer, Travel, and Design Costs (by the incomparable Rachel Jackson at Binah Designs): $1000 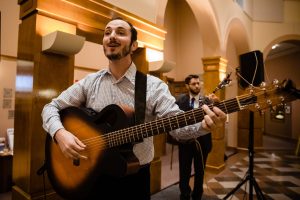 April and May – Editing, mixing, and mastering

May and June – Printing, packaging, promotion and distribution!

I am Jackson Vance Mercer. I currently live in Somerville, MA where I attend the Rabbinical School of Hebrew College in Newton, MA as a member of the inaugural cohort of the Nachshon Project’s Graduate School Fellowship. My passion for Judaism was cultivated in my childhood growing up at one of the flagship West Coast Reform Synagogue’s Congregation Rodef Sholom in San Rafael, CA where my Judaism was emboldened with music, spirituality and justice. I served as Rosh Shira/Rosh Tefillah at URJ Camp Newman in Santa Rosa, CA for several years and before that as the Music Specialist at JCC Camp Kehillah in San Rafael, CA. Recently, I was the Musical Director at Asiyah Jewish Community in Boston and right now I am working as the "Head Shadchan" at Unorthodox Celebrations as well as building an intentional-Judaica brand, Hiddur Mitzvah with the incredible Rachel Jackson of Binah Designs.

A Singing Shabbaton: Building a Community of Music

by Temple Beth-El of Birmingham